THE PACE IS SET!

We’ll return to our scheduled saga of my time with Star Trek in Hollywood in a couple of posts. For now, there are a couple of other things I want to talk about. One of them is the man I consider the single greatest living artist in comic books: The one and only George Perez! 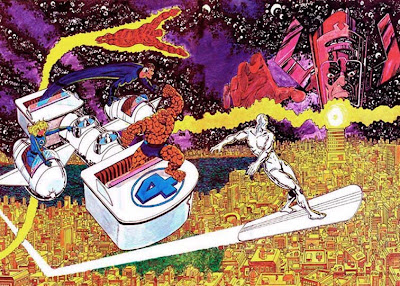 Here’s the wrap-around cover of the portfolio book Perez: Accent on the First E, which I ordered through the mail in high school. Click on the image to get the full effect! This early rendering of the Fantastic Four, the Silver Surfer, and Galactus demonstrates, even at the dawn of his professional career, everything that George’s work is about. I still have my copy of Accent, signed by George himself. At the time I was heavily into using Prismacolor pencils and I colored some of the drawings in the book, which are mostly black-and-white pencil reproductions. I wish now I hadn’t done that. It’s one of those things you do when you’re very young and not thinking about what you’re doing.

George is one of the last great “classical” comic book artists, the guys who came directly off the influence of the pioneers like Jack Kirby, et al. He names the long-running Superman artist Curt Swan, as well as Kirby, among his major influences. George is also one of the last Marvel artists to have a nickname. In the first generation of Marvel Comics, one of the ways that the company formed bonds and camaraderie with fans was by dubbing its creative talent with nicknames: Stan “The Man” Lee, Jack “King” Kirby, Rascally Roy Thomas, Jazzy John Romita, etc. George was very fittingly dubbed “The Pacesetter” and did his first major work on The Avengers, his favorite Marvel book, with writer Stainless Steve Englehart. (The name “Pacesetter” survives today as the title of the official magazine devoted to George’s work. The only other comic book artist with a regular magazine specifically about him is Jack Kirby himself. A couple of Pacesetter issues contain articles that I wrote about George’s incredible work on the 1979 X-Men Annual and his career breakthrough on the Marvel adaptation of the film Logan’s Run.)

I’m embarrassed to admit that I didn’t think highly of George’s work at first. At the time, I was under the spell of artist Rich Buckler (for whom George had once been an assistant!), who had adapted his style to emulate that of Jack Kirby, frequently to the point of actually swiping Kirby drawings from the past and putting them into new stories. (And if you know the King’s work well enough you can identify which images he took from where!) The inking of such luminaries as my old pal Joe Sinnott and Chic Stone only reinforced the effect. Well, the first book on which I spotted George’s work was The Inhumans, a Fantastic Four spinoff, and I was insulted that a book about FF characters wasn’t being drawn by Buckler! I looked at George’s art and thought, Who is this nobody? I didn’t appreciate it, to say the least, and I ignored Perez--at first.

Except for the early work of Jack Kirby himself, this shot of the inconceivable Inhumans is perhaps the best representation of those characters I’ve ever seen. 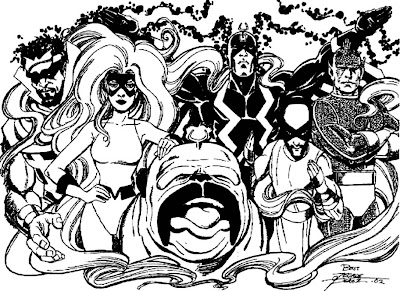 Then they put him in a place where I couldn’t ignore him: My longtime third-favorite comic book (after The Fantastic Four and The Amazing Spider-Man), The Avengers. George quickly proved himself to be the ideal Avengers artist. He relished drawing large numbers of characters--the more, the merrier--in a variety of costumes. He took consummate delight in drawing elaborate action sequences with multitudes of combatants--again, the more the merrier. And what’s more, he drew everything in the most excruciating detail. The maxim “Less is more” has never applied to George’s work; with him “Less is boring!” George draws it all; nothing is too trivial to be left out. If someone else goes the extra mile in his work, George goes the extra light-year! Detail, detail, detail--and then more detail on top of that!

And his “camera” is never at a static, fixed point; he’ll take you from a panning wide shot to an upshot to a downshot to a closeup to an over-the-shoulder shot, all in one page. And he’ll pack twice as many panels into a page as any other artist will.

Here are the three most essential Avengers, Thor, Iron Man, and Captain America, captured in their purest and most classic form by the artist who draws them better than anyone else. I colored this one myself. 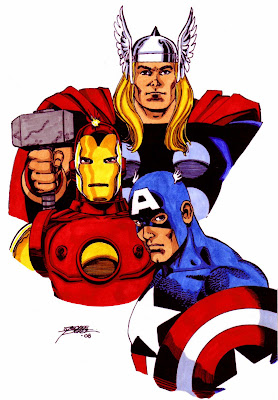 If that’s not enough, he makes every character look like his or her best, most awesome, and if applicable, most beautiful possible self. His heroes and heroines are more heroic, more handsome, more gorgeous. His villains are more fiendish and dangerous-looking. And he has a knack for capturing the best possible version of everyone’s costume. Oh, and about costumes: When it comes time to design a new character or give an old character a new look, very few people in the business can design ‘em better than the Pacesetter.

This is a design master for Nightwing (that’s Batman's first Robin, Dick Grayson, all grown up) that the character unfortunately never wore in any DC Comics story. It amply demonstrates George’s wondrous design skills. It is truly a masterpiece; you don’t know how I wish I had created this! 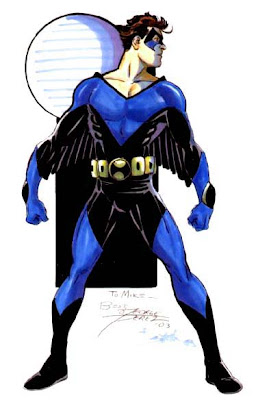 Indifference and disdain on my part quickly turned to respect, admiration, and awe. Where I snubbed George at first, now I couldn’t wait to see the next issue of every book he drew. (Which is a lucky thing, because the next book they gave him was The Fantastic Four itself!) And as I had with Kirby before him, I made it my business not just to look at his work, but to study every facet of everything he did, to learn how it all worked. It didn’t take long for George to establish himself as my all-time most important artistic role model in comics, after Kirby himself. It’s a position he holds with me to this very day.

This post of The Quantum Blog, then, is devoted to some of my favorite drawings I’ve found online by the former Mr. Nobody. Immediately below are my old friends, the Fantastic Four, in another shot that I personally colored. This one, showing the FF as I loved them, in their pure Kirby form, used to be one of the rotating images in the upper left hand corner of the FF Plaza Website, which my pal Sean Kleefeld used to run. 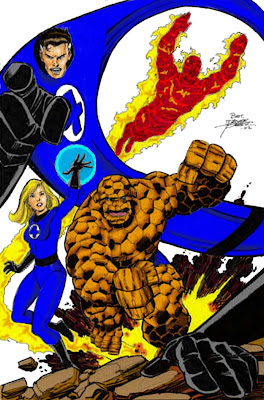 George never got a chance to work with my favorite member of the X-Men, Phoenix, besides a few isolated images. Here’s one where he captures her perfectly. 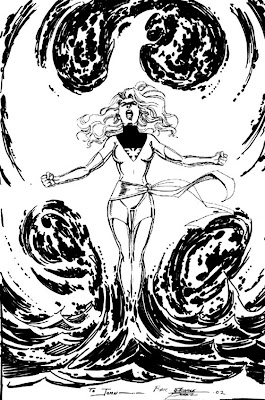 George has a special love of drawing super-heroines. This is a shot of Ms. Marvel, skillfully rendered in line and grey tones. 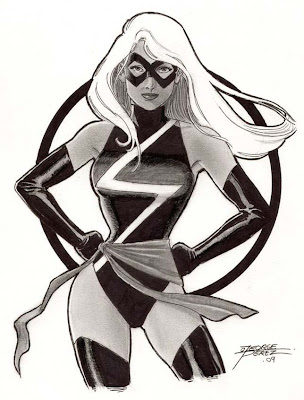 This shot of the sensational Storm in her original, classic Dave Cockrum design shows why it’s such a shame that X-Men characters have been made over so much. Storm has never looked better. 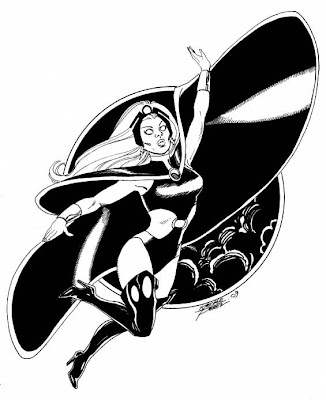 George’s most magnificent accomplishment was the miniseries Avengers/JLA, the battle between and team-up of the Avengers and the Justice League of America, which ran 4 issues and more than 200 pages--all of them penciled and inked by the Pacesetter. I consider it the all-time, single greatest achievement in comic book art. This drawing from the early 1980s commemorates the first time this story was attempted. 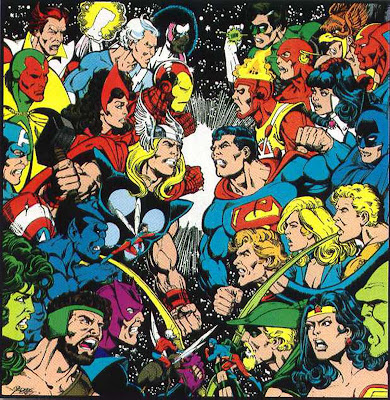 And speaking of the Avengers and the Justice League...

By far my favorite rendition of Wonder Woman was that of George in the mid-1980s. He took a character that I basically liked and a book that I never read, and made her my favorite DC character with a book I couldn’t miss. His work with the Princess of Paradise remains one of the most ingenious things I’ve ever read in comics. Here’s WW battling Marvel’s She-Hulk. 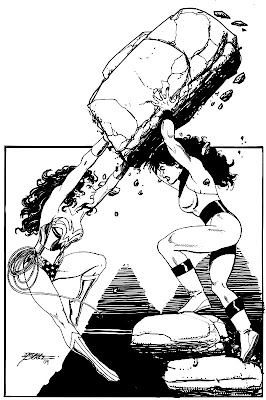 Though fans have the strongest attachment to Hal Jordan in the identity of the Green Lantern, the sexiest of the Green Lanterns and my personal favorite is Hal’s successor (who recently stepped aside as the “official” GL when Jordan was resurrected), Kyle Rayner. This costume that Kyle wore is my favorite of all the Green Lantern ensembles. Sexy character, sexy costume, the world’s best comic artist: It’s a win/win/win combination. I really should color this one... 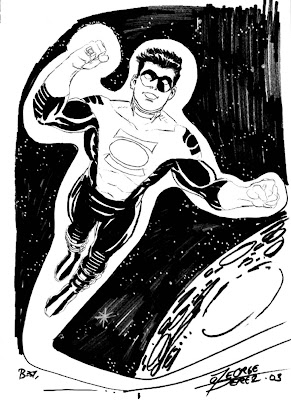 To finish up, the Silver Surfer (whose book George used to write!) and a smackdown between the mighty Thor in his classic Kirby form and the ever-incredible Hulk! I have one more of these that I colored myself, but I’m saving that one because I’m sending a scan of it to my brother for his birthday in a few weeks and I want it to be a surprise! 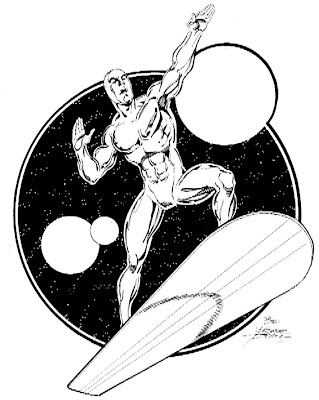 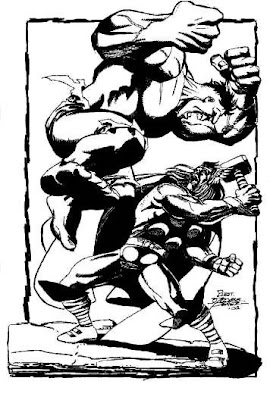 Next in The Quantum Blog: Do you know what “Lilapsophilia” is? If not, try not to let your house be swept up over the rainbow until we meet again, and I’ll tell you about one of my secret passions. Then, it’s back to Hollywood and more of my personal Star Trek experience.

we are in
PlanetUSA.us
united states's search engine

I Write Like by Mémoires, Mac journal software. Analyze your writing!

WEB PLACES OF INTEREST TO J.A. FLUDD (AND FRIENDS)

CHAT ON THE QUANTUM BLOG

Get the Hunk du Jour Widget

VISITORS TO THE QUANTUM BLOG